We are pleased to announce our new little guy, Tate! We have been very excited to meet Tate! To say this pregnancy was tough is a bit of an understatement. Here is the story of his birth according to Travis.
At our 20 week Ultrasound (around Memorial Day) we found out that Tate was missing his left hand. Everything else at that time looked fairly normal, so we quickly accepted the fact that he would learn to do things differently and that he would be fine.
The first thing I said to Brandi as we were leaving the Ultrasound that day is that I was excited because Tate could hunt with a crossbow and he would probably have the most success in our group because of it.  A couple of weeks earlier I told my Brother Jason that I wanted to hunt with a crossbow and that I had been checking them out on our website, AddictedtoHunting.com. He informed me that you can only hunt with a crossbow if you have some sort of a disability, so I was initially pretty jealous of Tate because I am a horrible shot with my bow and a crossbow would help me a ton.
We had several follow up appointments with the Ultrasound Dr’s and they were pretty frustrating. They were searching for anything that could be wrong due to his hand and we heard a lot of speculation. We were told that we should prepare to only have Tate with us for about a day, but that he could live a full happy life as well. Needless to say there was a lot of worrying and guessing about what we were about to face.
After a couple of appointments we had one of the nurses call and re-schedule one of our Ultrasounds so that we could meet with Dr. Ball. She said he was one of the best and Brandi’s obgyn spoke very highly of him. We met with him and he told us to not worry about what the other Dr’s had told us. He said as long as Tate was growing he would be fine. We took that to heart and kept that with us through the pregnancy, but we knew there could be additional issues to his hand.
It was a long pregnancy full of guessing and wondering what our little guy would be like. We eventually told the kids about Tate’s hand, using a Mr. Potato Head, and you can imagine the funny looks we have received as Lexi tells everyone what is so “awesome” about her little brother. She is always quick to point out that it is okay that he doesn’t have a left hand because Jesus will give him one someday.
Brandi was induced with Tate early last week and he finally made his arrival around 8:30 on October 18th. The delivery started out like both of our other kids. I ordered the epidural for Brandi as early as I could so that we could have a nice relaxing day at the hospital. After several hours she finally started progressing and she was in a lot of discomfort. She would push the button for her medicine and nothing was coming out and she felt like she could feel everything. We got the nurse in to check her and she was definitely ready to go.
During the delivery of Hunter and Lexi my role was to basically support Brandi. When Dr. Yamashiro came in he asked me how involved I wanted to be, so I told him as involved as I could be. Much to Brandi’s dismay he made the nurse go get a pair of gloves for me and a gown and told me I was going to catch the baby. To be honest I had no idea what that really meant. I thought as involved as I can be meant to cut the cord.
As I was putting on my gown and gloves Brandi was yelling at me to hurry up, apparently she was hurting pretty bad. Although she was trying to steal away from my shining moment, I wouldn’t let her. I could recognize she was pretty jealous that I was going to do something she had never done before, and I have forgiven her for yelling at me to hurry up and put the dang gloves on.
Dr. Yamashiro positioned me below Brandi and told me how to deliver Tate. While I am a little upset that I was too busy to video tape the whole delivery and share it with everyone on YouTube, it was pretty exciting preparing to catch Tate. Dr. Yamashiro helped me quite a bit, but for the most part I delivered Tate into the world. It was amazing and I am pretty sure I will be much more relaxed driving to the hospital with our next baby because I am fairly confident I could do it again. Just kidding Brandi.
I really wish I had a picture of me in my gown and gloves, but Brandi was too impatient to take a picture. You will just have to take my word for it that I looked very legit! 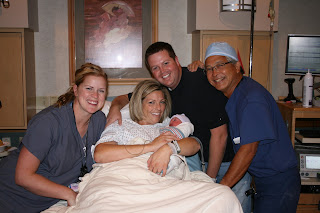 Here is our first family picture with the three kiddos. 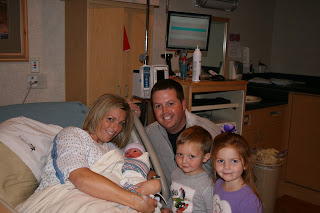 The kids are so excited Tate is here and it is so fun to watch them kiss him and tell him stories. We know that Lexi and Hunter are ready to be the older siblings that Tate needs in his life! 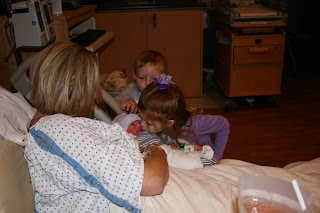 After he was born they noticed he wasn’t sucking and they also noticed that he didn’t move his facial muscles a lot. They moved him to the nicu so that he could get an IV while he learned how to eat. That night our pediatrician called me and talked to me about what they think Tate had. Tate has Moebius Syndrome.
Don’t worry if you have never heard of it, none of the nurses or other Dr’s really had either. We have been trying to learn as much as we can and it was incredible up at Primary’s to see how many Dr’s, nurses and students wanted to swing by to check out Tate. He was like a new toy for them to play with and they wanted to learn as much as they could before we took him home. 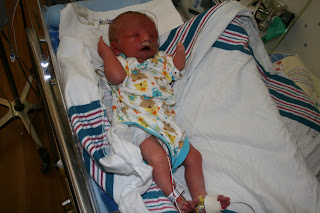 It is a very rare syndrome that affects about 2-20 kids out of a million. We have been trying to learn as much as we can about it and we will continue to learn what we can do to help him with it. The good news is that it is not life threatening and once he learns how to eat he will be able to come home.
Here is a good definition of what Moebius Syndrome is:

Moebius syndrome is a rare neurological disorder that is present at birth.  It primarily affects the 6th and 7th cranial nerves, leaving those with the condition unable to move their faces (they can’t smile, frown, suck, grimace or blink their eyes) and unable to move their eyes laterally.
Other cranial nerves may be affected, especially the 3rd, 4th, 5th, 9th, 10th and 12th.  There may be skeletal involvement causing hand/feet anomalies and/or club feet. Respiratory problems, speech and swallowing disorders, visual impairments, sensory integration dysfunction, sleep disorders, and weak upper body strength may also be present.  Approximately 30% of children with Moebius syndrome are on the autism spectrum.

We love Tate so much and we are so happy that he is a part of our family! Thanks to everyone for all of the love and support through the pregnancy and now that Tate is here. There have been a lot of people praying for Tate and we are so grateful to know that he has such a strong support group to help him with anything he needs.
I can’t wait to buy him his first crossbow and get him out hunting with me!